A Mother's Love ~ An Anthology of Murder and Mayhem Available! 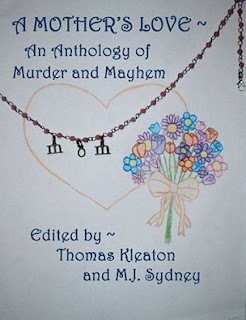 A mother's love has no boundaries. In every species, mothers risk their own lives and sacrifice themselves to save their children. Throughout the animal kingdom, even the most gentle of creatures attack and kill to protect their young.

We hear news stories of children who commit unthinkable acts of murder in order to protect their mothers, stories of mothers who hire hit men to eliminate bullies or stalkers, stories of both mother and child who die protecting the other.

The bond between a mother and her children is like no other. It is a bond so strong that it can turn love and nurturing into homicidal frenzy. And sometimes it leads to the ultimate sacrifice. It is a bond that cannot be broken by fear, by separation or even by death.

As part of the event, my co-editor Thomas and I planned to announce one winner story. The winner would receive a handmade Mother's Day necklace and bracelet set. During the cover design, we ended up with an extra necklace so we have two contest winners ~ Mercedes Murdock Yardley for her story, Salt and the runner up, McKenzie Johnston Winberry for her story, Story Time.

It was a difficult choice but both of these stories expanded on the theme and took it beyond a mother protecting her children or a child protecting its mother and included elements of both. Congratulations to Mercedes who won the necklace shown on the cover image and to McKenzie who won a similar necklace and bracelet set.


And thank you to RayvnRaiyn (who also happens to be my daughter) for the cover design and image. She spent quite a few hours on this and went through just as many drafts creating the cover.

The anthology's eBook edition is now available on Amazon. The print edition will be available in July, along with the upcoming Father's Day anthology.