Bump Off Your Enemies Anthology and 'The Yellow Canary' 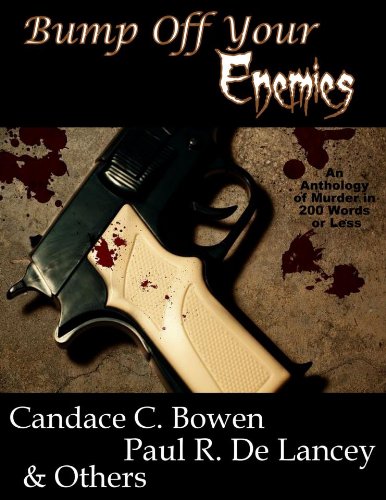 The challenge ~ Fictionally "Bump Off Your Enemies" in 200 words or less during the March 15, 2013 Facebook literary event hosted by authors Candace C. Bowen and Paul De Lancey.

Forty-six authors took the flash-murder challenge, now compiled in the e-book anthology, Bump Off Your Enemies, available on Amazon.


My *Bump Off Your Enemies* Anthology Submission ~ The Yellow Canary

The nursery reeked of bourbon and shame. Every night, Jonathan returned with a new bottle clutched in his hands. Returned to the last place he saw their smiling faces. Empty bottles lined the floor and crawled up the walls. He drank. He waited. He knew they would come for him. Elsie made sure of that before her and the baby left this world.

The shadows blew passed the windows, lit only by a faint streetlight in the distance. The yellow canary sat patiently on the windowsill. As Jonathan stood in the center of the dark, shadowed room, he heard the old nursery rocker creak and closed his eyes. It was time. He knew he deserved what was to come.

A light breeze encircled his body as the shadows moved closer. The songbird’s cold, gentle feet perched on his shoulder. The cooling calmness rapidly vanished as the second canary perched on the opposite shoulder, followed by dozens more.

The shadows surrounded him in an icy hurricane of wind as the whispered chanting began. “I know…I know.”

Jonathan tried to open his eyes and scream, but it was too late. He belonged to the shadows and the pecking canaries would devour him.